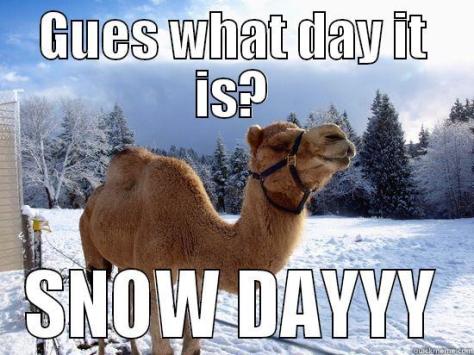 I believe this is the third State of Emergency that my state of New Jersey has had this winter. Why? It’s snowing. In inches. Not feet. As I look outside my window at a little past 1:00 PM, there’s barely an inch on the ground, and the snowmageddon was called before eleven. Seriously, why not wait until there’s at least a foot on the ground, but then that’s not even going to happen. We’re supposed to get between two-and-four inches, and then it’s going to turn to rain. Tomorrow the high’s supposed to be fifty-six. Sheesh. What’s happening to my state. Talk about a bunch of snowflakes. 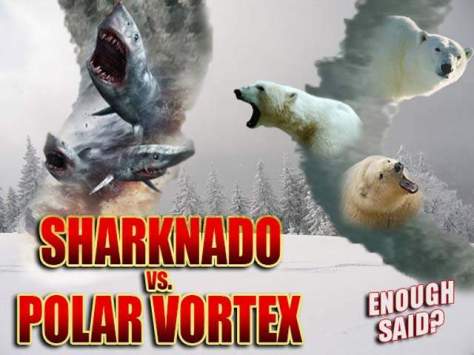 When I went to my  1:30 class this afternoon, it was bright and sunny and about 34 degrees, a slight breeze, and just a smattering of puffy clouds low on the horizon. When I got out about an hour and a half later, it was gray with the wind picking up, a snowflake here and there appearing. Fifteen minutes later a snow squall hit with blinding force, the visibility virtually zero, the temperature dropping fourteen degrees in five minutes. Another fifteen minutes later it was all but over, and now, two hours later, with the sun setting, the thermometer is expected to drop like a rock. The forecast in my part of New Jersey is for five above. Which makes me happy as if I were in Wisconsin, that’d be a day at the beach. The temps there when you apply the windchill factor rival the Arctic. In fact, I think it was warmer in Antarctica today.

Can you think of a better time to stay inside and write? Of course not! 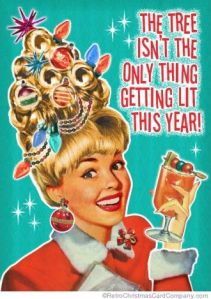 The following is a reboot of a post from a couple of years ago, but I happen to like it and I’ve been so busy grading end-of-semester essays, my brain’s too mushed to think up anything original. So consider it a Christmas gift–from me to you and visa-versa. (You may thank me now.)

With Hanukkah now behind us, another holiday fest starts imminently, but you would think that it already has, as much as gets done in December. As for me, I simply let the ‘daze rumble past like a runaway train, and if something happens to fall out of the caboose for me, so be it.  But if you believe the concept driving the season is peace and not what piece is for you, then here’s a few hints to let you know just how far behind you are:

1. The Great Work Stoppage – As soon as the Thanksgiving turkey comes out of the oven, it’s as if everyone forgets they have a job. Suddenly all meetings become holiday parties, and if you’re expecting that report to get finished, you might as well call back next year. In my particular milieu, I nearly have to hit my students over the head with their final essays to get them to even remember my name.

2. Vanishing Editors – If you were hoping to get your manuscript sold before the end of the year–ha ha, good one! From now until after New Year’s, editors, as well as a fair amount of agents, take a breather and make the rounds of Gotham’s holiday celebrations, where I imagine a fair amount of deal making takes place over the babaganoush. If you’re the writer, think of it as a temporary reprieve from submission angst.

3. Everything’s on Sale – Back in the day, you used to have to wait until after Christmas to get a price cut, but thanks to retail giants like Target and Macy’s, the discounts only get deeper the closer you get to the big day. Which is fine, because if you’re like me, the shopping starts the day before, and I’m all about half-off.

4. The Dread Christmas Sweater – Think about it: if it wasn’t the holidays, would you ever wear that sweater in public? Do you actually like rick-rack, glitter, Rudolph’s battery-operated flashing nose, or cable-knitted Thomas Kinkade reproductions on your chest? So much better to wear the DCS’s less offensive cousins, The Christmas Socks. At least we only have to endure them when you cross your legs. 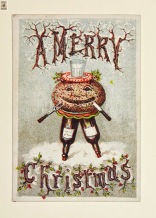 5. “Oh go ahead – it’s the Holidays.” – Which means, go ahead and eat that brandy cheesecake as big as your head. What the hell – you’re on Lipitor anyway, and your blood test isn’t until January. Which also means you can eat half that Hickory Farm’s beef stick, which is my personal holiday no-denial favorite. No fooling, I’m stocking up!

Only thirteen days left. Get crackin’! 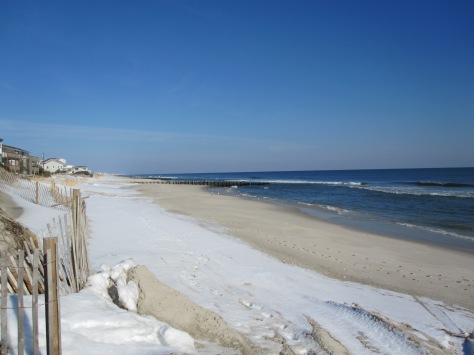 Yes, this is what the beach looks like in the winter, and being a Jersey Girl from the Shore, it’s a sight I’ve seen many times. Still, it’s no less strange, seeing snow on the beach, and it’s something that I’ll probably not see soon nearly as much as I’ve seen in the past. We’ve put the old homestead up for sale since the ‘rents have passed on, though if you live in Jersey, you’re never too far from the coastline. It’s where I grew up and it’s what has sustained me all these years, but change is good, and I’m looking if not for greener (or sandier) pastures, but different ones.

Like where? Well, I’ve always loved the mountains. My father’s side of the family comes from the Catskill region of New York State (though their roots are in Iowa and South Dakota). I have friends in Vermont, and having only been to the Rockies once, I’d like to see more of them. My sister is contemplating moving to a house on a lake, and at least if I swam in it (which is a given), I wouldn’t have to think about sharks. Not that I worry too much when I swim in the ocean, but it’s one less thing I have to worry about.

Anyway, we still have the beach house a bit longer so here’s one more pix. It’s a hell of a lot better media than I’ve been gawking at lately anyway. 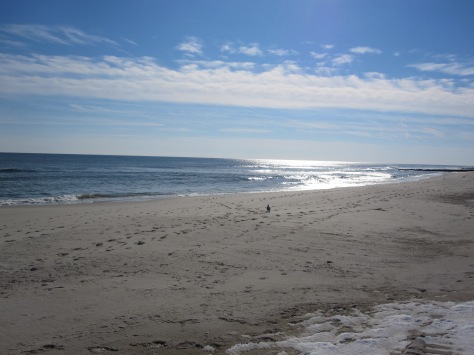 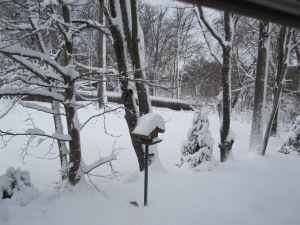 It’s a sunny morning in my neck of New Jersey, and unlike the photo to the left, snow-free. The wind is relatively calm, and from my window I can see all kinds of birds pecking at the feeder and except for the barren vegetation, it could almost be anytime of the year. But it isn’t, and I don’t need to step outside into the mid-twenties chill to feel the hollowness of the season in my bones, especially when the Weather Bleaters are predicting a Snowmageddon for the weekend.  Sorry if I’m being a bit of a Debbie Downer, but seriously, after the choreographed optimism of the New Year fades back into the mundane, what are we actually left with? Only the anti-climatic yawn of the Dead of Winter and the mind-numbing ennui that follows.

Maybe it’s just a sugar crash after all those Christmas cookies, but last fall’s good intentions and best laid plans now seem as sensible as earmuffs in August. What happened to that get-up-and-go, those ideas that seemed so workable, those plans set to be implemented as soon as the everything got back to normal, post-holiday? Instead, you’re quickly finding out that things don’t really change, that everything goes comfortably back to the way it was, or more often than not, gets just a little bit worse. (Like waiting for that first paycheck of 2016? Times like these make you wish you’d majored in creative accounting and not creative writing.) You’re finding yourself just a little more broke, a touch fatter, a tad less cheerful and a whole lot lazier. A stretch on the sofa feels more natural that an extended stretch at laptop, and when you do find yourself in front of a screen, it’s more likely for Netflix than for fixing that severely flawed manuscript.

Okay, whine over. Back to work.