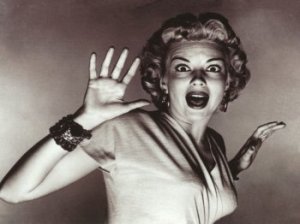 It’s a sad, sad fact of the writing life that every book needs a synopsis if you want to sell it. I’m sorry, but synopses to me are like carbuncles on top of boils, about as compatible to my literary mojo as coconuts are to refrigerators. When I know I have to write one, it’s like I have creative mono I’m so not able to start. Fact is I hate hate hate the little bastards, as after all these years, my brain still fights writing one. If you’re not sure what I’m talking about, then welcome to Writer Hell, sweetheart. Your angsty little life is about to get so much worse.

A synopsis is your book boiled down almost to its skivvies. At the most it’s about five pages, but lately the going length seems to be around two. With such a tight page count, you might think it makes the writing easier, but you couldn’t be more wrong. Actually, it makes it so much harder. How hard? Let me search for a difficult enough analogy. Have you ever tried to gather a bunch of peeled grapes with one hand? That’s kind of what it’s like. (Actually, the literal version of that would be easier, but don’t let me disillusion you). You need to encapsulate all those slippery plot points from start to finish, naming your major characters, their conflicts and motivations, holding nothing back.  Don’t want to divulge everything? Then just include something like, Intrigued? Then request the full manuscript to find out what happens next! and you’ll win the race to the ‘delete’ button. (Please, just–no.) Do include a hook at the beginning and a satisfying ending, and no being cagey or overly creative, either. It’s just the facts, ma’am, and do remember to keep it in the present tense, and state your word count and genre under the title at the top. Also, it should go without saying to make sure it’s proofread, spell-checked, grammar-checked and formatted until it’s pink and screaming.

A synopsis, above all, is a selling tool. You need one to get an agent as after you do, she’ll need it to sell your fabulousness to an editor. A synopsis not only spells out your book, it tells an editor you’re capable of finishing one, as very rarely will she have your whole manuscript in front of her at the first pass. Because of their brevity, synopses, at least when they’re written well, can be succinct little works of art. With a well-written synopsis, you’re straddling the fence between novelist and journalist, as it’s a sign of polish and skill to write eye-catching florid-free prose when you’re concentrating strictly on the main points. When it’s done effectively and efficiently, it can make all the difference between rejection and acceptance.

I just passed the sagging middle of my work-in-progress, so to celebrate–er, rather as to verify some of the locales I wrote about, I decided to take a trip to see how close I came to their reality. Google and Google Earth will only take you so far, and the committed writer shouldn’t ever rely solely on virtual reality over the real thing. So my husband and I packed up the car and headed for coastal Jersey, which to this South Jerseyan, is not the same as the more celebrated Shore. Parts of Southern Coastal New Jersey consist of a vast tidewater region of creeks, rivers, and salt marshes or what what the locals refer to as meadows (“meddas,” as my Piney husband calls them), which are varied and lush as some of their inhabitants are hard-shelled and truly, well, bizarre.

Our first stop was just past Tuckerton near Mystic Islands, in an area we simply refer to as Great Bay Boulevard. It’s a long, straightaway (more or less) though the meadows teeming with fish, crab, egrets, osprey, songbirds, even the occasional eagle, and especially this time of year–April to August–turtles all over the place. In fact, I’ve never seen SO many wild turtles in one place. They were in the water, the reeds and most especially, crawling all over the road. 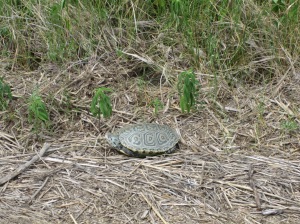 The locals take this mating period quite seriously, and are very protective. Everywhere we saw not only official TURTLE CROSSING roadsigns, but 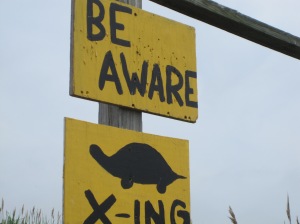 hand-scrawled and painted ones by the dozens. And for the amount of turtles we saw scampering (if that’s what you can call it) across the road, and believe me, they were EVERYWHERE, in two days we only saw one dead.  Pretty miraculous if you think

about it. We also saw at lot of them swimming in the bay at a place we went for dinner called the Oyster Creek Inn (fabulous) in Leeds Point. And if you don’t know what Leeds Point is legendary for, then I

suggest you look it up, or troll old episodes of The

X-Files. (An aside: if you have ANY kind of aversion to greenhead flies, do NOT venture anywhere near here.  They are huge, vicious, tenacious bastards with wings, and they will hunt you down, then proceed to chaw the skin off your bones. I truly believe this is where the legend of the Jersey Devil began. A photo cannot even begin to do 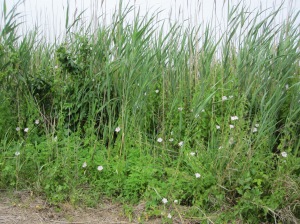 them justice.) I should also mention that all around us the spring flowers were in full bloom. I’m pretty dumb when it comes to naming flora, but I did recognize a profusion of honeysuckle as well as wild rose, plus a bunch of other stuff I won’t embarrass myself

trying to name. There was also a lot of pretty good fishing and crabbing around, as I could tell from the amount of people hanging off the bridges that link the various sedge islands. And apparently the shellfish must be doing pretty good as well, as my husband fell into a food coma after a dinner of Barnegat Bay broiled scallops. 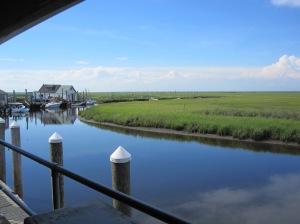 (A note about the picture to the right: it is the boardwalk below the Oyster Creek Inn where my husband’s arm was nearly chawed off by a greenhead. No sympathy. Kill. Them. All.)

Anyway, I could go on and on, but I’ll end this pictorial by letting the snaps below speak for themselves. What follows is what we encountered on Route 9 just past New Gretna. It’s a mansion that sits on the southbound side of the road, but luckily enough has a big enough shoulder on the opposite side, otherwise traffic would surely be snarled. It is out-and-out the purest display of WTF I’ve ever seen, crawling over and atop and in front a seven-foot-high concrete wall. Classic Weird New Jersey. Enlarge, enjoy. 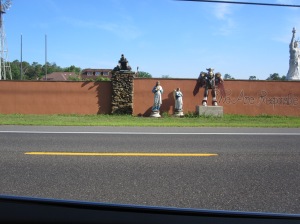 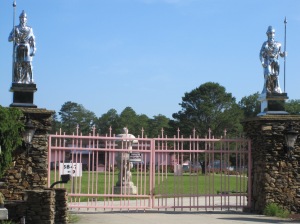 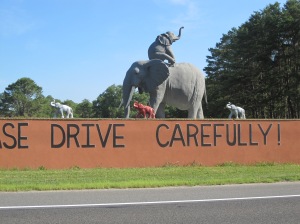 If you’re going to call yourself a writer, then please acquaint yourself with the meaning of frustration. There’s so many applications and levels of it, the longer you contemplate the word, the more varied the strains. There’s the frustration you feel when you start, with your characters, the opening line, the title, the voice. Then there’s the continuity, the plotting, the criticism you get when you get cocky enough to let someone take a peek, or when you have to toss out a whole chapter because your research was flawed. Then you get to the inevitable saggy middle where you get frustrated trying to dig yourself out of a black hole, and when you finally do, you find that half of what your wrote has to be rewritten. Then as you’re sliding down that slippery slope to the mandatory Dark Moment, you find it’s more café au lait than espresso, and you’re going to have to turn that Everyman into a bastard if you’re ever going to make your plot believable. But nothing’s worse than tying it all up at the end, when in order to avoid that oh-so-easy Dickensian conclusion, you have actually have everything make sense, which, let me tell you, is about as easy as straining tar. Still, somehow you eventually make it all work, and before long, you’re exhaling a big sigh of relief and typing the end. But isn’t all the cruelest cut of all, because then is when the real frustration begins.

Rewrites, edits, proofreads, rewrites, edit, edit, edit. Format. Submit. Reject. Submit. Reject. Submit. Reject, reject, reject. Beat yourself up. Tell yourself you suck as a writer, spend the next three days binge-watching Family Guy and eating tater tots and canned frosting, until you can’t stand it any longer. So you pick up that paperback that spent more time being hurled against the wall than in your hands, but which ultimately restores your writing mojo through its horribleness when you cry, “I can fucking do it SO much better!” ignoring, of course, it spent three months topping the New York Times List. (Sigh…there’s JUST no justice in the world, is there?) So what’s a writer to do?

Listen, sweeties, if you came here looking for answers, I honestly don’t know what to tell you. Except maybe if you’re going to call yourself a writer, you just might as well get used to frustration. As patronizing as it sounds, you’re also going to have work around it if you’re ever going to get anywhere, so you might as well just keep writing. Though you should remember that just because frustration is a writer’s constant companion, it doesn’t mean you have to make it your BFF.

Nothing like a 90 degree day in New York! But then there’s nothing like a day in New York anyway–doubly so when it’s BookExpo America. They’ll be in Chicago next year, so after five years running, I wasn’t about to miss my chance to catch it one more time while it’s on the East Coast. This year, me and and my sister, Gretchen Weerheim, went, trolling the aisles and generally looking for hot trends, dealmakers, and free tote bags, finding a lot of the first two, but precious few of the last. Didn’t help we were trolling a bit too late in the day, but it was fun nonetheless, and try to keep us away when it comes back to NYC! 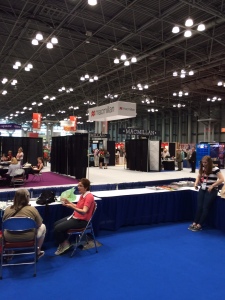