Cyber Monday means Bargain Romance at .99! But don’t think you aren’t getting your money’s worth. Take a look at what’s in store for Andy and Julie with a free Sneak Peek above, just under a buck at Amazon and Barnes & Noble and everywhere tomes of this genius are sold.

Get crackin’ kids! You don’t want to be the last on you block to be one of the in crowd! 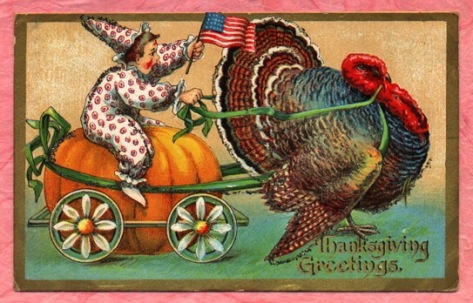 Don’t know what its subliminal message is, but this is the best Thanksgiving card I’ve seen in a while. I really do think it says it all. Have a great holiday, and pour one for me!

This Veterans’ Day, along with remembering the soldiers who served, let’s also not forget the ones who are still fighting the war. Yes, I say war, because there’s some who forget the fact our country is at war, has been for over twelve years now, and aside from the faded SUPPORT OUR TROOPS ribbon on the back of the occasional car, it’s as we’re suffering from a collective amnesia. But there’s real troops out there overseas, bored and scared and lonely, and really looking for a diversion that’ll take them away from an awful reality, if only for a little while. And there’s no better–and more portable–way to do that than sharing a book with a soldier. Here’s just a few ways you can do that…

As the wife of a veteran let me say — many thanks!

It was a pretty innocuous thing. We were out of juice, and since Sweetie was going to the store that morning, I asked if he could pick up some. “Put it on my list!” he called from the shower, which he had left atop the microwave. So I went to it, idly glancing at what items he had already amassed: light cream, yogurt, bread, banana’s–

I stopped dead. Oh no – in my own home? I grabbed the list, storming into the bathroom. “Banana’s?!” I cried. “BANANA’S?”

He stared at me, washcloth in hand. “Right. Bananas. Jesus, what’s the problem?”

I could barely sputter the words. “Look!” I said, holding up the slip of pink scratch paper. “Right there!” I said, pointing to the tiny blip of blue ink between the third a and the s. “What’s that!”

“What’s what?” he said, squinting through soap and the shower curtain.

“THAT!” I said, flicking the teensy squiggle. “You put an apostrophe before the s! You did it to make a plural!”

He looked at me like I just grew a third eye. “No I didn’t. And if I did, I didn’t even think about it.”

My jaw dropped. “You didn’t even think about it? All your life you’ve been reading and writing and pluralizing words just fine and overnight, the rules of grammar change and you don’t even notice?! My God – it’s like aliens have abducted our collective grammatical knowledge! They must be planting billions of plural-snatching apostrophes in our brains while we sleep!”

He twisted a wad of washcloth into his ear, cocking a brow. “You want the bananas or what?”

It was all I could do to whimper. How did this happen? I saw a sign at an ice cream parlor the other day: Birthday Party’s Available. And at a fast food joint down the Shore: Best Burger’s on the Island! Granted, sometimes possessive apostrophes get sloughed away when the word grouping falls into popular parlance – Pikes Peak, is one, and in my home state of New Jersey, the town of Toms River, the county seat. But

where did this aberrant pluralization come from? You can understand wanting to abbreviate by taking something away, but this is ADDING baggage. Unless, as in the case of Birthday Party’s, the writer was absent the day they gave a lesson on turning words that end in y’s (yes, this is correct according to the AP Stylebook) into plurals by adding -ies. No. That can’t be it. It’s just too widespread anymore. An epidemic. With no vaccine in sight.

Which can only lead me to one conclusion: it’s those darn aliens. So close your windows at night, keep a  Strunk and White at the ready, and a firm eye out for pods in the basement.