I don’t know, maybe it’s because I’m drinking too much caffeine in the afternoon but I’ve been waking up way too early in the morning lately. Or maybe I’m just of that certain age, but I really don’t want to go there at the moment. In any event, I’ve been writing really, really early in the morning these past few weeks, and for me that means at my desk by six-thirty or seven. I write until around  eight or eight-thirty, then it’s off to get ready for my first class at ten-thirty. I’ve been patting myself on the back for being so dedicated, then I heard about this group of people, and I have a whole new reason to feel inadequate.  The 5 AM Writer’s Club according to their website, is “…a dedicated group of writers who cheer each other on when it’s needed, and pass donuts around when they’re hungry. (BTW Check the #5amWritersClub hashtag to find a fantastic group of people to follow on Twitter.)”

But what it means to me is a bunch of dedicated writers who actually find their muse up and awake before the crack of dawn. I find this completely admirable, as although I’ve been know to get up early,  it’s usually not by choice, and I just take advantage of the situation. Still, what it says to me is if you want to write, if you need to write, you WILL find the time to do it. No excuses. Writers write. Ass in chair. And if you want some cheering on, well now you know where to go to find it. 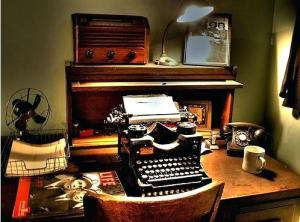 Another school year, another entry from the MFA Pit. This time it’s all about process, about conjuring up your creative muse, about getting that perfect writing space, about finding the time to write. This semester MFA Candidate One is studying Aesthetic and Process, about why we write what we write, and how to go about bringing that process to fruition…

Here we are again, this time, examining your writing process as well as—and we’ll get to that soon enough—why you write what you write. Sometimes you can’t exactly say why you’re drawn to a particular genre. You may like romance because you like an HEA (happily ever after), or you like fantasy as you’re always drawn to other worlds. Whatever captures your imagination is something very individual to you, and it’s something that you’ll explore as well as you go along. You discovered this a bit in a previous semester, when you started out writing a straight romance, then found out you’re so much more comfortable adapting those romantic concepts to fantasy. More revelations we come along soon enough this semester, and this will become more apparent when you write a closing paper at the end.
Process is something we’re sometimes slow to discover. It’s the “how” of what we’re writing. You mentioned in the beginning essay you don’t find outlining as helpful as it could be. Well, I’ve discovered over the years there’s really two basic kind of writers out there—the pantsters and the planners. The pantsters write by the seat of their pants—start the story and then let the characters take them where they may. The planners find this process horrifying. They outline, they use index cards, bulletin boards, collages—anything to keep them in sequence and on track. Most writers fall somewhere in between. Your using a journal is a good example of this. I always have what I call my story guide. It’s a kind of a journal in which I list my characters, their names, occupations, descriptions, characteristics, etc. I list the main plot of the story, the conflict, the dark moment, mostly all the things I need to keep straight as the story progresses. For example, you forget how old one of your characters is, or in what town they’re to meet the villain at the end. This gives you something you could always refer back to. It’s also a handy place to list changes you want to adapt in later chapters when you’re editing a draft.
A place to write can be tricky at times when you live with other people. Unless you have a dedicated space at home, you sometimes have to shift around our make compromises. But it could also be outside of where you live. It could be a favorite bench in a park, a table at Starbucks, or in the 3rd floor lounge in the Student Center (I wrote a flash fiction piece there once!) It’s anyplace where you can wrap your head around your story. And that’s only up to you to decide.
Until next time — Writers write!

Poor Yorick: A Journal of Rediscovered Objects is an online literary publication of the MFA Program at Western Connecticut State University. The journal publishes poems, stories, essays, profiles, digital video shorts, photo essays, scholarly articles, and other innovative works about or inspired by rediscovered objects and/or images of material culture. In addition to unsolicited submissions, the journal’s editorial staff will occasionally identify a particular historical object, collection, exhibit, etc., and call for submissions inspired by the selected artifact. Poor Yorick also works in conjunction with museums both locally and nationally to identify and encourage innovative works focusing on lesser-known and overlooked objects and images.

For more information about submitting, please click here for their Submissions guidelines.

Hey! Are you an expert on something? A writer with plotting/characterization/genre tips up your sleeve? Have knowledge you’re just itching to disseminate? Then by ALL MEANS YOU NEED TO SUBMIT! Not to a publisher (not now anyway!) But to Liberty State Fiction Writers, a tri-state multi-genre fiction writers organization who’s looking for presenters for their 10th Annual Writers Conference in March 2019 in beautiful Iselin, New Jersey! Submit your Workshop proposals here, and spread the wealth–of knowledge, that is. (Though you can send me money anytime. I’m a starving artist, after all.)