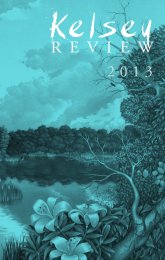 Somehow I managed to end up between the pages of The Kelsey Review again! This time it’s an excerpt from one of the books I’m throwing out there for your approval, The Heiress of Bearberry. You can take a look right here at this site, or you can click on this link for a nifty turn-by-turn version of the 2013 edition of the literary mag. It’s chock full of all kinds of talent from Mercer County, NJ (that’s New Jersey’s capital county for those left unawares), from photos to original artwork, to poems and short stories and of course, excerpts from soon-to-be-sold novels extraordinaire. Who knows where it may lead? Last year I was lucky enough to get nominated for a Pushcart Prize, for a my short story “Hawks” in the 2012 edition. Pick up a copy and you can say you knew me when!

Laugh if you want, but you have to start somewhere. For those aspiring writers out there don’t discount your local press. A publishing cred is a publishing cred, and people do read these things. Plus it’s still a bit of a thrill to have someone think what you write is worth reading. And the more that you put yourself out there, the more of a junkie you become. What was it Dorothy Parker said…? “I love writing, but I love having written better.”

Today I learned my short story “Hawks,” originally published in The Kelsey Review, had been nominated for the Pushcart Prize. Needless to say I’m a tad excited, and in the (likely!) event that I don’t win…well, it’s kind of like the Academy Awards–it’s enough just to be nominated! What follows is an excerpt for your perusal…

Alex bought the bird feeder at a yard sale.

“Five bucks,” he said, flicking cobwebs off the little wood and plastic chalet. He mounted it atop a metal rail from an old king-size bed frame, tamping it into the yard outside our bedroom window. Beside it grew a line of former Christmas trees mixed with a few wild red cedar. “Food and shelter, right, Maisie?” He dumped a coffeecan of nut and berry blend inside, then slung an arm over my shoulder. “What else do you need?”

A sweet gesture, which certainly deserved a momentary break from my sarcasm. I said, “Thanks,” and pecked his cheek.

He smiled. “Let’s go in and see how it looks from the bedroom.”

When my parents retired and moved to Florida, I inherited my grandmother’s cedar chest. She had bought it years before she met and married my grandfather. Back then young ladies called them Hope Chests, filling them with all the items for a proper household: tatted doilies, antimacassars, starched white sheets, hand-sewn aprons, knitted baby booties. Now it sat below our bedroom window, holding blankets that came out smelling of mothballs. Alex lowered himself to it and pulled me down beside him.

“Look, the diner’s open.” He pointed out the window to the feeder, a few birds taking tentative hops forward. “And in case you’re wondering what they are…” He grinned, producing Peterson Field Guides – Eastern Birds.

“The directory,” he said, handing it to me.

“Thanks.” I leaned into him, idly flipping pages. “For the feeder, too.”

He kissed my neck. “Better seeing these guys in the morning than the back bumper of someone’s car, huh?”

He sighed. “Christ, Maisie, I thought it would cheer you up.”

“It does.” But I even sounded unconvincing to myself. “Really, it does.”

I read something once, don’t remember where, that men defined themselves by their jobs, and women by their relationships. If that were true, then in theory, I’d be just fine. I had a reasonably happy marriage. But that pearl of wisdom didn’t quite apply anymore. At least not to me.

“It came from the top,” the regional vice president had said. “I’m helpless, and that’s the truth. There really isn’t anything I can do about it. If they want you gone, you’re gone.” And that quickly, after nearly eleven years, this middle-aged middle manager was out on the street.

“That’s bullshit. You should’ve fought it,” Alex had said that night. “I would’ve.”

I looked to our bedroom window, the branches outside rustling in silhouette. “How? I was helpless. He said there’s nothing I can do about it. That’s the truth.”

“There’s always something you can do about it,” he had said, rolling over.

More birds flew into the feeder, perching on its ersatz front porch. One was small and gray and fat, with a pointy flip of feathers atop its head. I checked the Peterson’s: tufted titmouse. The other was an even smaller brown bird with a cocked tail and striped wings: house wren. The others I knew: two blue jays, big, noisy bullies, and a female cardinal, brown and red-tinged, sensibly less ostentatious than the males.

You should’ve fought it. Didn’t he get it? I tossed the Peterson’s to the chest. I was helpless. Absolutely, the truth. There was nothing I could do.

I had only been one week into my former job when I decided to quit smoking. Sick of freezing on door stoops and coughing up a bronchial passage every morning, I figured it the perfect New Year’s resolution. Fortunately, the person I was replacing gifted me with a virulent dose of the flu, so the first day or two, I didn’t even miss it. But by the third day, when I was finally able to breathe again, I felt every vein, neuron and impulse collapsing under the weight of its unrequited lust. But even that wasn’t the worst part, former smokers warned me. That came two weeks later when the chemical addiction wore off, and the psychological dependency tightened its grip. I scrambled for ritualistic substitutes: hazelnut latte for the after-dinner smoke, cinnamon Altoids for the drive home, fingernails for long phone calls. I even mourned the camaraderie of sidewalks and loading docks, joining my former cronies outdoors to revel in their secondhand fog. But with nothing to flick or puff I soon became suspect, a smokers’ Carrie Hatchet, and little by little they disowned me with each smugly satisfied inhale. I couldn’t help noticing the similarities now. And how much worse they actually were…

Exploring relationships,  dealing with loss, and observing nature are all themes that jump off the pages  of the 2012 edition of Kelsey Review, an arts journal published  annually by Mercer County Community College (MCCC) and now available  free at public libraries throughout Mercer County. Now in its 31st year,  the  2012 Review features 26 works of  fiction, non-fiction and poetry by 16 writers who live, work or study in Mercer  County.

Print copies of the latest edition of Kelsey Review are available, free, at libraries and selected bookstores throughout Mercer County, or view and enjoy it here in a new, innovative turn-page digital format. You can print, share, and download this publication. Many thanks to Review editor Dr. Ed Carmien for all his help and for thinking “Hawks” is worth the read!