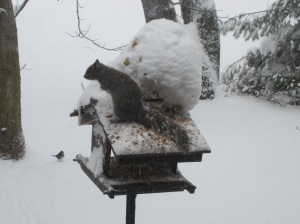 It was sunny and clear this afternoon in New Jersey, and unlike the photo to the left, snow-free. (Though that’s to change soon as a blizzard is barrelling up the coast) The wind was relatively calm, and from my window I could see all kinds of birds pecking at the feeder and except for the barren vegetation, it could have been almost be anytime of the year. But it isn’t, and I don’t need to step outside into the low-twenties chill to feel the hollowness of the season in my bones. After the choreographed optimism of the New Year fades into the mundane, what are we actually left with? Only the anti-climatic yawn of the Dead of Winter and the ennui that follows.

Maybe it’s just a sugar crash after all those Christmas cookies, but last fall’s good intentions and best laid plans now seem as sensible as earmuffs in August, and you’re left staring at a whole lot of letdowns. What happened to that get-up-and-go, those ideas that seemed so workable, those plans set to be implemented as soon as the everything got back to normal, post-holiday? Instead, you’re quickly finding out that things don’t really change, that everything goes comfortably back to the way it was, or more often than not, gets just a little bit worse.  You’re finding yourself just a little more broke, a touch fatter, a tad less cheerful and a whole lot lazier. A stretch on the sofa feels more natural that an extended stretch at laptop, and when you do find yourself in front of a screen, it’s more likely for Netflix than for fixing that severely flawed manuscript.

Here’s hoping. Back to work….