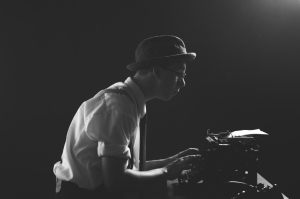 One New Year’s resolution I’m sure plenty of writers made was finally attempting that full-length novel. For some, NaNoWriMo in November gave them their first taste of what long form writing’s like, as a national novel-writing month forces derriere-in-chair and excuses out the window. But what if no amount of incentive will work? What if you just can’t get in the mood to write?

If you consider yourself a writer, then no one has to tell you about black moods. To a writer, they’re as welcoming as a rejection and as familiar as the backspace. Our black moods spawn as much from those brick walls we face as from the months we spend waiting for an answer, and when we do it’s often nothing we want to hear. Our dismal days are frequently filled with endless rewrites, verbal vomit and dead ends, and the inevitable recalcitrant character who insists on upending the plot. Sometimes when it gets really bad we end the day dispirited and frustrated, cursing our near obsession as we cry into our goblets of pinot noir, gorging on double-chocolate brownies and tater tots.  ANYWAY, this writing life can sure enough get you down now and then, no fooling. So what’s a sullen scribe to do?

Milk it, I say. Milk it for all it’s worth, right down to the quick until it’s pink and screaming. Believe it or not, your darkest days can bring out some of your most illuminated writing, as you dig into the depths of your rawest emotions. You need to write a scene where your protagonist loses the love of his life? His job? His home? His space in line for the newest iPhone? Drag yourself to your keyboard and lose your troubles in his, as pouring all that angst into your prose will make it so much richer and realistic, not to mention the cathartic bonus you’ll get out of unloading it all into some unwitting character. The same thing can work in reverse, too. Write your heroine falling in love on the day you finally nail that job, fit into those skinny jeans, eat a perfect peach. Works really well when you’re angry, too, letting that poor, downtrodden patsy finally give the bully his due as he lands a left dead-on his fictional jaw. Hey, it’s better than shoving your own fist into the sheet rock. It’ll save you a ton of dough in repairs, leaving more money to spend on pinot noir, tater tots and–oh, we’ll just leave that up to our very fertile imaginations, now won’t we?