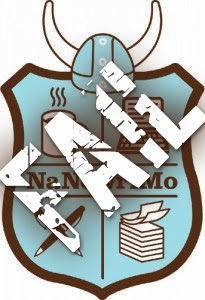 Yessiree — that’s me. A big ol’ smoking NaNoWriMo fail. I mean I tried–I really did. But I’m just not a verbal vomit type of writer. I’m deliberate. I ponder on a point. I edit, And re-edit. And edit again. That’s what I seem to do best–editing. Can’t stop myself. I just keep going back and forth until I get it right. And I eventually do. I have been published, so there is documented proof. But I just can’t keep writing until my fingers bleed and there’s pus crusting up my eyelashes. And apparently I’m not the only one. I found this on the Oxford Dictionaries blog about other ways to fuck up, so I know I’m not alone.  I feel so much better now.

1) Discover a television show you really have to binge watch

‘TV is a great way to learn about crafting dialogue,’ you say to yourself, planning to make detailed notes while watching a modern classic like The Wire or The West Wing. Eighteen hours later, you’re watching the finale of America’s Next Top Model with gummy sweets stuck to your face and empty bottles of wine littering the floor. Yes, great writing can happen on TV – but maybe ration the scenes you want to observe.

3) Use literally everything as a reason to cancel

‘I’m a busy, cool, important person,’ I mused, sitting alone in my room and wondering if ‘new BuzzFeed quiz’ was an event worth noting in my diary. My life was definitely too hectic to fit in anything like writing. Yes, sure, cancel if you’re going to your BFF’s birthday party or undergoing emergency surgery, but reasons for cancelling probably shouldn’t include online quizzes, trying out a new recipe, or staring blankly at a wall.

4) Get too obsessed with greatness

I recall the day (aged about 24) when I realized that it was unlikely I’d ever be a child prodigy. I’ve come to terms with that crushing blow, more or less, but I’m still apt to wander along my bookshelves past Austen, Dickens, and Woolf, and get despondent about the fact that my name won’t go down in the annals of history as one of the All Time Greats. That’s ok: there are plenty of other authors out there too.

5) Get overly absorbed, engrossed, occupied, and buried in a thesaurus

Nobody likes the same word several times in a paragraph – well, unless you’re Britney Spears singing ‘Womanizer’, of course – but you can save the finer points of synonym-hunting for later in the process. I got so bogged down in finding a synonym for ‘once’ that I never got as far as ‘upon a time’.

6) Do all the research

While some research is a good thing, too much research is dangerous. While some have the mind for this sort of prodigious content digestion and distillation, most of us don’t. So whether you are deep in a Wikipedia spiral reading about mathematical paradoxes (and plotting the metaphorical significance thereof) or lost in the dusty stacks of your local library cracking open dusty tomes (there might be a reason that book hasn’t been opened in decades), be careful not to get too lost, or you’ll never get anything down on the page at all.

Doubt sure feels like your friend at times! The friend who lazes next to your keyboard and tells you to cut that word … oh, and that one also … and maybe that entire character? Really, that whole page/scene/chapter is garbage – far better to just start all over again. Maybe a novel isn’t the best venue for this idea? Maybe a play, or a movie script, or a poem, or a — Eh, you get the picture. (Picture! What about a photo essay?!)

Nothing kills the mood like a spectacularly written – and spectacularly unsaved – paragraph. If you’re clever enough to be using a cloud-based document editor, then, well, good for you. I wasn’t.